Goat Simulator 3 Release Date: Simulators were the hottest thing in video games for a short time. There have been long-running series like Farming Simulator and Train Simulator, but for some reason, the simulation genre exploded with even more games that tried to cash in on how much people liked playing games that let them do different jobs and tasks as realistically as possible.

But, as with anything that was popular, parodies came quickly and in force. We got games like Surgeon Simulator, Granny Simulator, and even I Am Bread, in which you play as bread trying to get toasted.

Goat Simulator 3 is set to come out on November 17 for all platforms. Which Platforms Can Play Goat Simulator 3?

Goat Simulator 3 will be available on almost every major platform. You can play games with goats on PS4, PS5, Xbox One, Xbox Series X/S, and PC. That leaves out just Switch owners, so you can’t take this goat with you.

Goat Simulator 3 sounds like a bigger version of the first game, which was a big sandbox full of physics interactions, quests, activities, and just weird and fun places to explore and see what you can do. This is backed up by the official description, which has a lighthearted tone and says, “Get ready for another round of udder mayhem.

In the worst waste of time since Goat Simulator, you can lick, headbutt, and break your way through a brand-new open world. We won’t tell you how to play (except in the tutorial), but we’ll give you everything you need to be the goats of your dreams.”

On the store page, a list of the game’s most important features was shown. These features include being a goat or a goldfish, dressing up your goat, and playing a lot of minigames, which may or may not be just seven. They also “hired ‘game designers,’ and we’re told that they’ve added ‘an OK amount of content.’

That means you can play with more NPCs and physics interactions. From the trailer, you can expect the same kind of silly, small-bite fun as the first. Goat Simulator 3 wouldn’t be Goat Simulator 3 if the game worked well and didn’t crash or feel like it was falling apart.

Even with the Goat Simulator MMO expansion, Goat Simulator 3 will have co-op multiplayer for the first time. Up to three friends can play together. You can all play together, explore the world, and compete in the minigames we’ve already talked about, either locally or online.

Coffee Stain hasn’t said if cross-play will be available on any or all of the platforms Goat Simulator 3 will come out on, but we hope we won’t be locked out of our goat friends on different consoles.

Is There a Trailer for Goat Simulator 3? 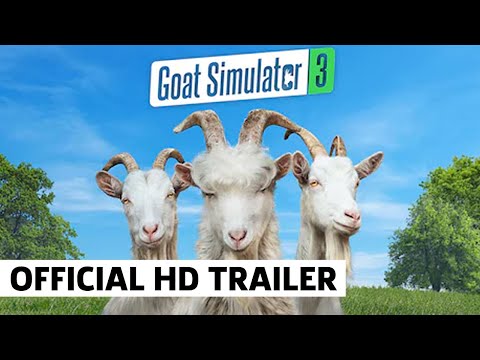