US will stand for Ukraine against Russia: On Thursday, U.S. President Joe Biden proposed a massive $33 billion package for arming and supporting Ukraine, saying that “caving” into Russia is not an option for the West as the conflict enters its third month.

Furthermore, Biden outlined in the White House proposed new laws to allow the use of luxury assets taken from Russian oligarchs under unprecedented sanctions to compensate Ukraine for the devastation wreaked by the invading Russians.

He acknowledged the high cost of U.S. support for Ukraine, but he said there was no other option in the conflict with Russian President Vladimir Putin. Thus, the US will stand for Ukraine.

Biden confirmed that the U.S. has already sent ten tank-killing weapons for every Russian tank sent into the country, demonstrating the magnitude of U.S. assistance to Ukraine, wreaking havoc on the larger and more heavily armed Russian forces. He did, however, respond to Russian officials and state media’s increasingly vehement claims that Moscow is fighting the entire West rather than just Ukraine. Moreover, the US will stand for Ukraine despite any hindrance from Russia.

The crisis in Ukraine

Russia’s Vladimir Putin’s assaults on multiple Ukrainian cities began overnight on February 24 and have continued day and night since, following months of posturing while denying any plans to attack.

War has become a tangible reality for millions of Ukrainians. Thousands of families have been separated from their loved ones in conflict zones. The world has been taken aback by Ukraine’s decision to halt Russia’s invasion. The new professional Russian army was expected to make significant progress, with a reputation for effectiveness that would have to be earned rather than assumed.

However, Ukrainian resistance was much stronger than expected, and Russian armored columns were halted and, in many cases, destroyed, as Ukraine used what weapons it had to the best effect and its determination to defend itself with vigor, surprising Russia and the rest of the world.

Since then, Ukraine has been inundated with weapons from Europe and the United States.

Despite Ukraine’s numerous victories, the halting of Russia’s sluggish advance, and Ukraine’s denial of Russian jets’ access to its airspace, the conflict’s toll on Ukraine’s arsenal of weapons was unavoidable.

The Russian defense ministry has released a video purporting to show Russian Navy Commander-in-Chief Nikolay Yevmenov and other high command members meeting with the crew of the sunken Moskva missile cruiser. 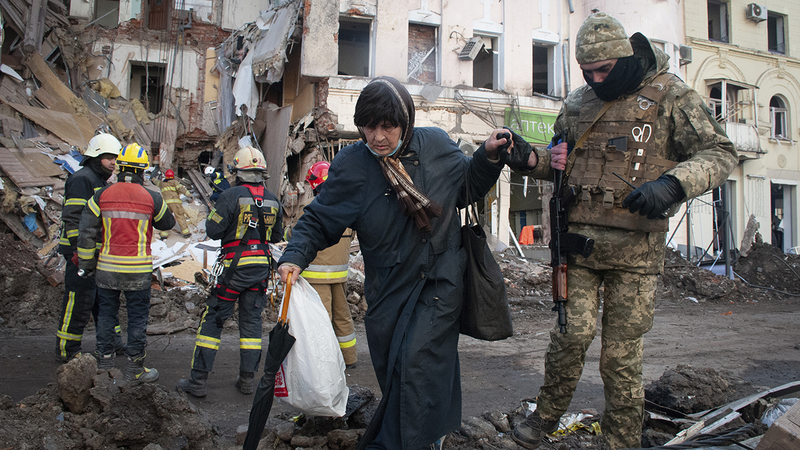 In his Easter sermon, Archbishop of Canterbury Justin Welby urged Russia to declare a cease-fire and withdraw from Ukraine.

According to the Anglican church’s leader, Easter is a time for peace, not “blood and iron.”

According to Italian Prime Minister Mario Draghi, Ukraine’s resistance to Russia’s invasion has been “heroic,” depriving Russia of a quick victory and setting a “prolonged” war.

Draghi stated in an interview published in the Italian daily Corriere della Sera that “what awaits us is a war of resistance, prolonged violence with continuing destruction.” “There is no indication that the Ukrainian people will accept Russia’s occupation.”

Furthermore, the US will stand for Ukraine and now proposed a $33 billion package for assistance.

US will stand with Ukraine

While acknowledging the high cost of assisting Ukraine, Biden stated that surrendering to Russia was not an option. The US will stand for Ukraine continuously.

The proposed $33 billion package will spend most of its funds on “military and other security assistance totaling $20 billion.” This means that weapons and ammunition are being delivered to Ukrainians.

According to the official, an additional $8.5 billion in economic aid is proposed to “assist the government of Ukraine in responding to the immediate crisis,” with an additional $3 billion proposed to fund, the U.S. will stand for Ukraine humanitarian assistance and address the global food supply price shock caused by Russia’s onslaught against Ukraine, a major wheat exporter. The proposed package also includes funds to address economic disruptions in the United States and elsewhere, such as the impact on food supplies and the availability of critical components used in high-tech manufacturing.

While both Republicans and Biden’s Democratic Party have expressed a desire to continue supporting Ukraine, the US will stand for Ukraine. A dispute over Biden’s request for an unrelated $22.5 billion COVID pandemic package threatens the approval process.

Aside from that, Biden has proposed a comprehensive legislative package to hold Russian oligarchs accountable for Putin’s aggression against Ukraine. This proposal seeks to streamline seizing oligarch assets, broaden the assets subject to seizure, and allow proceeds to flow to Ukraine.